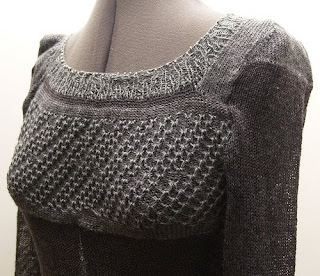 1. Tell us a bit about yourself!

I am Jen Paulousky, AKA Blue Alvarez of Blue Alvarez Designs (bluealvarez.com), and I am totally going to cheat and pull a few lines from my OKC profile:

I'm a 28 year old, female, ENFP bike commuter with a thing for spicy vegan food, heavy metal, and techno. I also own a condo, love to travel, and am studying two languages (Mandarin and Italian).

I work for a knitwear company during the day and design my own clothing at night. I'm specifically aiming to finish my business plan this year so I can move forward with some kind of direction, as opposed to just spasming wildly between creative projects. 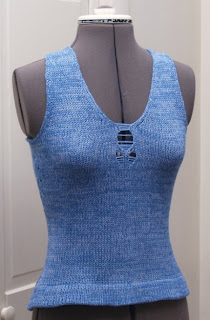 te a portion of my business earnings to that. For holidays 2008 it was Eve Ensler's work in the (v-day.org). So it's even more important that I get my shit together and start making some money, because the more I make the more I can give!

I'm also getting back into writing my own knitting patterns again, and that's led me to hang out with more Boston knitters and join a new fiber guild (commoncod.com) on top of the other guild I'm already in (bostonhandmade.org), so that's great for getting me out of the house.

2. How long have you been doing your artwork/craft?
Well, I've been sewing since childhood. My mom's stepmom was a seamstress in Italy, and when she moved here with my grandfather, they had a flat in Needham for many years where I and my brother would often end up after school. I was bored and inquisitive, so she let me into the sewing room, presumably to keep me out of trouble

Knitting's more recent, circa 2004. But oddly enough as soon as my dad saw my knitting take off he was like "Hey, my mom used to knit whole suits for people, she was a master knitter" and I was like "How did I make it to 24 without you or her telling me this?" 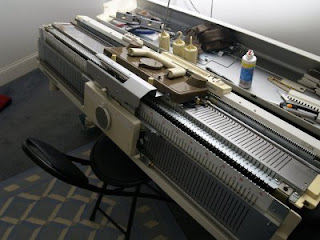 That said, I'm still search for my aesthetic. I say this as a disclaimer to my answer to Q #3 because I think I struggled for a long time with the idea that in order to sell anything I had to make "grown up clothes" - you know, mainstream, fairly boring, maybe a zipper or two here or there for fun. So a lot of the stuff on my website or in previous collections has been a weird mash up of psudo-punk and Talbots. But I think no matter how hard I try force myself into that kind of mold, it's not going to happen. So I'm hoping by the end of this year I'll have a really solid "look" hammered out that I can represent for a long time.

3. Describe your work. What inspires you?
Darkness, depravity, electronica, all things urban. Well, okay maybe the second one is a bit tongue in cheek, but I've always been drawn to very dramatic, almost confrontational styles. I kind of always 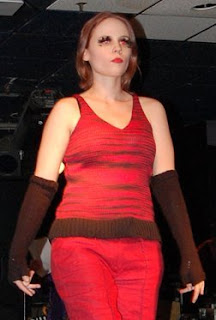 thought I would grow out of it, but I never did. And now I have people like Alexander McQueen, Gareth Pugh, and a host of others before them to point to for proof that at least if I'm crazy, I don't have to be crazy alone.

The only twist I'll add to that is that most designers I see who are really into gothic, over the top styles design exactly that. But I commute by bike, and still love bright colors, and am constantly travelling (when I can afford it!). So, I'm trying to take that desire for the romantic and dramatic and channel it into more streamlined styles, suitable for a life on the go. Like, what would Edgar Allen Poe wear today if he were on his way to London via Rome?

Or, to use a different example, I think my female muse is a cross between Amanda Palmer when she's on tour, but not on stage, and Aeon Flux with less hair and more pants. For male styles, I try to picture the new, buff, sober Trent Reznor on vacation. Damn getting old made that man hot. But of course somewhere in there I try to make it so that, sizing aside, a lot of the styles will actually be gender neutral, or at least transferable. It's tough in the gender binary that fashion still clings too, but I'm working on it.
4. What are your favorite materials to work with?

There's this yarn Berroco makes now called Comfort, and it is hands down the best synthetic (read: vegan) yarn on the market right now, in either worsted or DK weight (that's kn 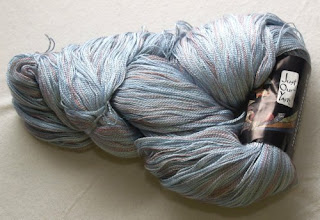 itter speak for normal and slightly thinner than normal). So I buy a lot of that, but depressingly Berroco doesn't do wholesale so I am paying retail for it, which is ridiculous. I have to find something else!

For woven fabric, I love linen, especially in black, gray, and metallic finishes. But linen is cold comfort in the winter, pun intended. So I still use a lot of cotton, especially twills and heavier weights, and I'm an enormous fan of bamboo and soy-based products for drape and warmth.
5. What new items are you working on?

I'm part of a show at Vinalia (101 Arch St., Boston) on Saturday Feb 28th (8pm - 12 am) so right now I'm working on finishing those outfits, of which there'll be six. This is sort of a transitional show for me, because I'm building off of a lot of navy and blue pieces I had from last year, but trying to add a bit of an edge to them. So I re-designed a shrug I had designed a few years ago, and that came out great. I've also got a recycled jersey dress with a fun railroad denim panel I'm proud of, and a velvet jacket and some linen capris that point decidedly more toward the direction I'm ultimately headed in with my future lines.