So last Saturday, despite the awful weather, my friend Naomi and I ventured to Fenway Park for the Sox vs Rays game. They delayed the game for two hours, even though it wasn't even raining at the time, which was ok because it gave us a chance to have dinner (Italian sausages and beer) and have a nice chat. The game finally started at 9:15, a mere two hours before the rains finally DID come! Annoying (because they could've probably gotten a full game in there had they started on time) but ultimately ok because when they called the game in the 6th inning we were winning 9-1. Whew! 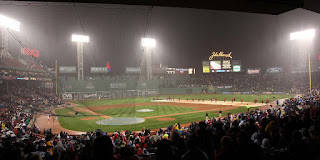 Here's a pic I took when the heavens did open up. It was actually very pretty to watch from our covered seats. 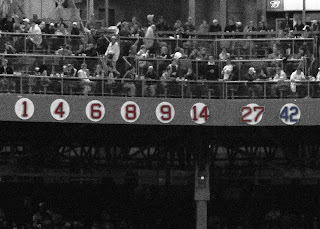 This is another one I got while we were wandering around during the delay. They are the retired numbers of Red Sox greats (from left): Bobby Doerr, Joe Cronin, Johnny Pesky, Carl Yastrzemski, Ted Williams, Jim Rice, Carlton Fisk, and Jackie Robinson (league retired number).
"Retired Numbers" is available as a print in my Etsy Shop.