I have always liked this photograph taken by my friend Allison of Fraske Designs: 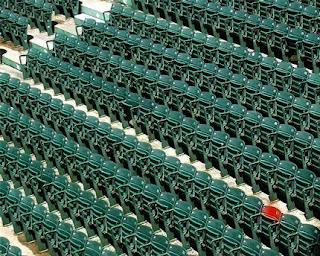 (Available for purchase in her Etsy shop)
Why is there only one red seat in a sea of greens? It's there to commemorate the longest home run hit in Fenway Park. It was hit by Ted Williams in 1946 and traveled 502 feet to land in that particular seat way out in the bleachers. If that wasn't a good enough story, I was reminded of the details in this blog post on Fenway West about the man, Joe Boucher from Albany, NY, who happened to be sitting in the now infamous seat at the time:

"He came with his family for the doubleheader. Wore a straw hat and proceeded to fall asleep. Ted Williams decided to wake him up by hitting a 502 foot home run. Joe Boucher after the game...admitted he was a...gulp...Yankees fan. He also said that the baseball gods blessed him that day by him not being hurt by William's home run ball...and from that day on, he was a Red Sox fan. The headline the next day in the newspaper, "BULLSEYE- Knocks Sense Into Yankee Fan!" LOL. Joe Boucher kept to his word and remained a Red Sox fan." ~Fenway West

Great story, no? So many legends at Fenway Park that really help make it a magical place.