Don't Try This at Home

Back to renovation nation (just in case you maybe thought it was over!)- last night after much urging by me, Seth did the spray foam insulation on the interior walls of what will be my office. He had gotten a good deal on some that another home renovator decided not to use so even though he didn't have any experience with the stuff, he figured he's give it a whirl. 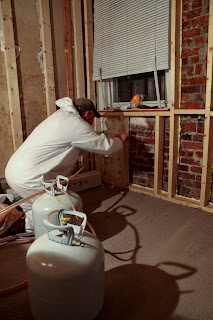 As you can see in the picture below, he also did two coats on the ceiling which should prevent our upstairs neighbor's (frequent) leaks from becoming our problem (no more waking up at 3am to a waterfall in the living room! Yay!). 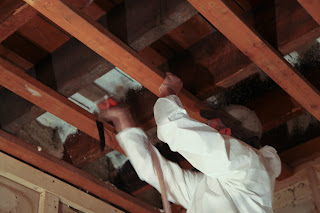 To say it went smoothly would be...well, inaccurate. It was a lot messier than either of us anticipated; by the end of the project there were globs of the sticky stuff everywhere, glued to whatever it had landed on, and had to be scraped up with a tape knife. I stayed out of the room and Seth had on a full body suit he'd picked up at Home Depot (and a mask and goggles) which was great since every inch of him was covered by the end. 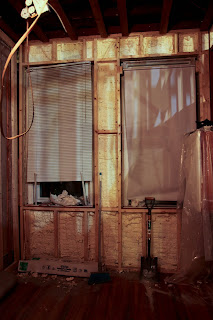 It was a bit too much for me; I had a brief mental breakdown halfway through when the stuff was spraying over the wall into our bedroom, coating a pile of clothes (his) and part of the bed! Seth was happy with the end result though and will be finishing the other two rooms that need to be done this weekend... when I will not be around. :)

Email ThisBlogThis!Share to TwitterShare to FacebookShare to Pinterest
Labels: renovations

Wow, I feel your pain. Our house has been worked on for over two years now. Lotss of dust and noise