My parents are currently off on one of their travel adventures, this time to Chile and Argentina. When I saw my mom was on Google chat the other day and asked where she was, she said "Bariloche" which after a quick Wikipedia search I found out meant San Carlos de Beriloche in Argentina. 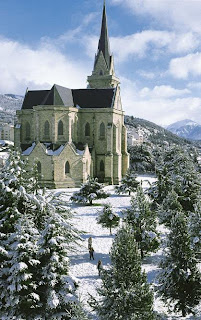 This photo of the "catedral" came up as well and it completely charmed me, perched high on a snowy mountain. I also learned that while mainly known for it's various outdoor activities, Bariloche became famous in 1995 when it was made known to the press to be "a haven for former Nazi war criminals." Crazy!

Has anyone else been there before?

Email ThisBlogThis!Share to TwitterShare to FacebookShare to Pinterest
Labels: travel