Otto (and the Beagle) 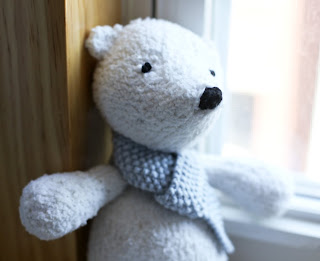 I have several knitting projects going on now, two being rather large and taking a lot longer than I thought they would, so back in August I decided to do a little side project. It was a "stashbuster," using up yarn (Tinkerbell by Peter Pan) I'd bought for no particular reason and now had nothing to do with. After much consideration, I finally decided the best use of the yarn would be to create a polar bear, specifically the one designed by Ysolda Teague(from Squam!) named Otto. 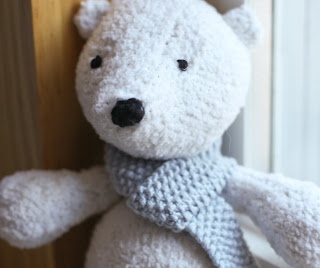 I fell in love with this knit pretty quickly; by the time his little pear-shaped head was done, you could really see where the project was going and I was eager to finish. I also decided he needed a scarf so I used a bit of leftover cotton in a seed stitch and voila. A little less nude bear. 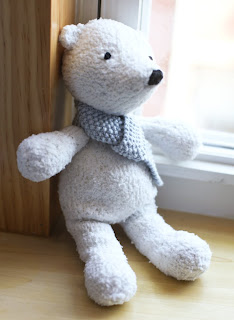 The only tricky part was that I was using the magic loop method where the pattern called for DPNs, otherwise it was surprisingly simple. 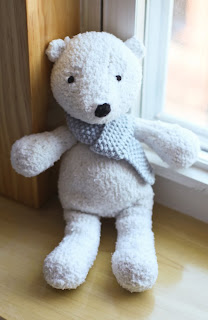 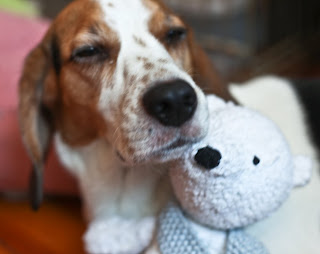 Don't be fooled by the cuteness; the dog thought the bear was for him and desperately wanted to eat him.

You can see Ysolda's other sweet little animal patterns on her website or on Ravelry. To see what I'm working on, visit my Ravelry page here.

I LOVE IT!!! It came out really well, and the scarf adds just the right touch! He's definitely going to need a warmer wardrobe for the cold New England winter ahead.