In the Studio: The Bag Shot

One of the "deliverables" I had in my Intro to Light class this week was called the Bag Shot. The idea was that we were supposed to set up a scene where someone has dropped a bag, all of the stuff has fallen out and, using props and lighting, tell something about the person who dropped it and the circumstances (night/day, indoors/outdoors, etc). Everyone in my class took the concept and ran; one person did a beach scene, one did a forest scene, they were all really elaborate!

I decided my scene was set in India in the early morning on a hot day and the bag dropped was a grocery bag, right at the poor person's front step (they almost made it home...). There is an Indian grocery store next to the school so I went there for the food, and I printed some rupees to be falling out of a little purse I bought in India (the slippers are from India too). For the ground I used brown kraft paper and hay brought in by my classmate, Kim, who has pet rabbits. We used a gold gel to create a warm look and a cucoloris for the shadowing. It may look like a big mess but it is actually a really styled one! 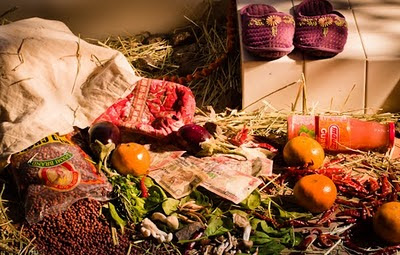